Last updated on Feb 23, 2021 by Editorial Staff
Affiliate Disclosure: When you buy through links on our site, we may earn an affiliate commission at no cost to you. 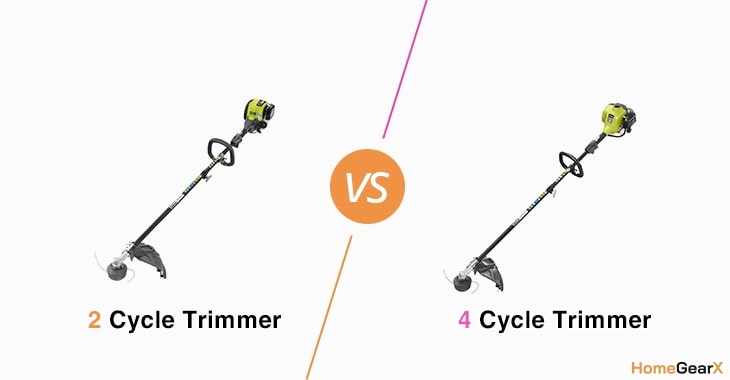 As you shop for a weed eater or string trimmer as it is also called, you first need to decide whether to buy gas, electric or battery-powered model.

While for many people this is a more straightforward decision, the problem comes in when they decide to go for the gas trimmer models and hence have to choose whether to buy a 2-cycle or 4-cycle trimmer.

Both types do a good enough job trimming those hard to reach areas where your lawnmower would be useless despite being more powerful.

But 2 and 4-cycle trimmers will differ in various aspects and knowing these differences should help you decide which one to buy. Check out our detailed comparison below for a clearer understanding of what sets the two trimmers apart. 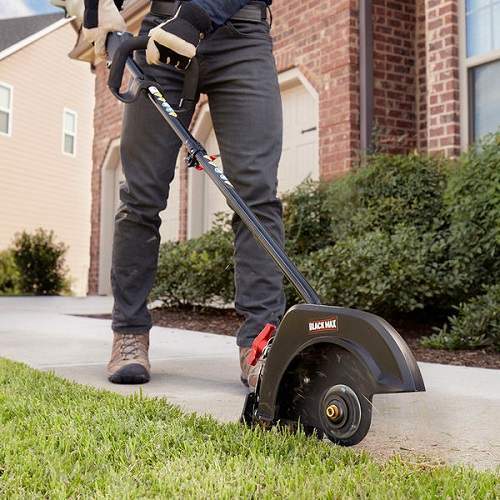 Traditionally, the 2-cycle or 2-stroke engines have been used to power smaller machines like the trimmers and small lawnmowers while the 4-cycle ones are used for larger machines such as vehicles.

The name of this engine comes from how it works and as it suggests, it will provide the power needed to operate the machine by making two strokes.

In a 2-cycle trimmer, the engine runs in two stages only with the first stage or stroke combining the power and exhausts strokes while the second stroke combines the compression and intake strokes. What this means is that in the 2-cycle trimmer power is generated every two cycles.

Given that there are fewer parts on the 2-cycle engines, the trimmers that use them will be generally lighter than the 4-cycle models which makes them easier to handle. And the simplicity of these trimmers also makes them more affordable.

Contrary to what many people tend to assume, the 2-cycle trimmer will relatively be more powerful than the 4-cycle ones with all factors held constant. When it comes to maintenance, they will also give you an easy time thanks to the fewer parts.

But these trimmers can still come with a lot of work as you will need to give them a precise oil and gas mixture for them to function well. The 2-stroke engines also use up significantly more fuel. 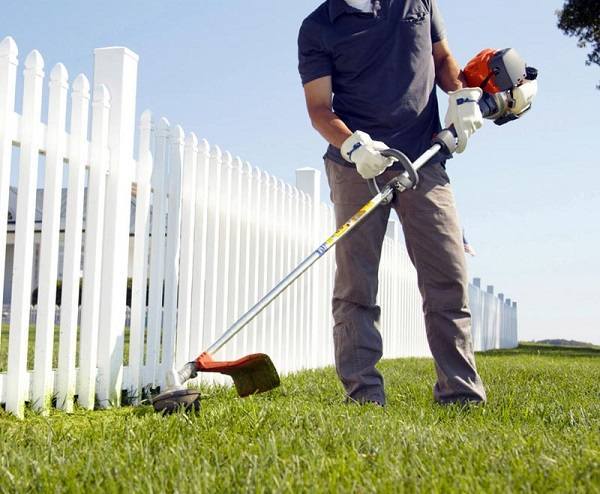 With the 4-stroke trimmer, the engine will go through four stages to produce power. Unlike the 2-cycle types, no strokes will be combined and hence the engine has to go through each individually.

These 4 strokes are power, exhaust, intake and compression stroke. And while the 2-cycle engines will need an oil and gas mixture to run, the 4-cycle will keep them separately which is one of the reasons why they use fuel more efficiently.

Overall, these trimmers are made with more heavy-duty parts and a more durable overall construction and will typically outlast most 2-cycle trimmers. And also note that they will use the same gasoline that you would use in a vehicle.

Despite being typically used for larger engines such as what you find in vehicles, 4-cycle engines are now becoming more and more popular for smaller garden tools because besides being more efficient they also offer quieter operation.

But, things are not all favorable with the 4-cycle trimmers because like the 2-cycle models, they also come with several demerits. Key among them is that they are pricier to buy and maintenance tends to be quite hectic given the more parts and more complex design.

Both the 2-cycle and 4-cycle trimmers can still do a good enough job for typical home lawn care and maintenance. But because they work differently, they will be ideal for different users and situations. And to determine which will work best for you, it is vital to keep the differences below in mind.

Contrary to what many string trimmer users might assume, the 2-cycle engine will generate significantly more power than the 4-cycle. But this is only so when both come in the same engine size, use the same fuel type and other factors are also held constant.

And the reason for this is also quite simple. A 2-cycle engine only needs 2 strokes to produce power while the 4-cycle will require four which means it will take more effort to produce the same amount of power as the 2-cycle engine.

Also, another advantage that the 2-cyle will have is that it will deliver higher power to weight ratio given that it is also a more lightweight engine.

If like many weed eater users you hate having to measure and mix fuel with gasoline, you should avoid any trimmer with a 2-cycle engine as this will be an inevitable part of using it.

These trimmers will require you to mix gas and oil at ratios of 50:1 or 40:1 depending on the model which is not only time-consuming but can also be a dirty and tedious job. The mixture is what powers and lubricates the engine and besides being a dirty job, it will also not lubricate as well as using oil alone.

4-cyle trimmers, on the other hand, do not require an oil gas mix as they will come with separate chambers for each meaning you will only need to fill them up. Also, they provide more efficient lubrication since they will have a dedicated lubrication system that uses oil only.

But, it is worth keeping in mind that the oil and gasoline mix in a 2-cycle can also have some advantages such as allowing the trimmer to function in any orientation as the engine still gets sufficient lubrication in any angle something a 4-cycle engine struggles with.

Fuel efficiency will be more dependent on the weed eater model you are buying than whether you go for 2 or 4 stroke engines. While some brands make their products highly efficient, others do not pay a lot of attention to this.

However, the fuel efficiency still differs among the two gas trimmer engine types with the 4-stroke models being significantly the more fuel-efficient option.

With the 4-cycle engine, you get more precisely controlled air intake and exhaust strokes which leads to greater fuel efficiency. But, with a 2-stroke some fuel ends up getting wasted due to the combined strokes.

The use of oil and gasoline mixture can also reduce the fuel efficiency greatly and at the same time also increases pollution by creating significantly dirtier combustion unlike with the 4-cycle engine where the gasoline alone will be burnt more cleanly.

There is probably nothing like a super quiet weed eater. And while the electric and cordless models might be relatively quieter, the gas-powered options are some of the noisiest you can use.

With that said, the 2-cycle and 4-cycle trimmers will also vary in the amount of noise they produce given the different working mechanism, but they are both still quite noisy.

However, the 2-cycle trimmers will produce much more noise than the 4-cycle trimmers which have been built to not only operate more efficiently but also significantly quieter.

With the 4-cycle trimmers, the ignition and combustion stages which are the noisiest in any engine will take place in a closed up cylinder which means less noise comes out. In a 2-cycle model, this feature is not available and they will hence be noisier.

Since the weed eater is a handheld tool that you may need to hold in your hand for an extended period when trimming large sections, its weight matters a lot. And the lighter it is the better as it means you can use it for extended periods with minimal hand fatigue.

With trimmers, the actual weight you get will depend on the specific model you buy but the weight will also differ between the 2 and 4-cycle types with the latter being the heavier of the two trimmers.

The extra weight on these trimmers comes from the fact that they need more parts to work than the regular 2-cycle engines. Also, the more complex design adds to the weight and for some models, the 4-cycle trimmers can be up to 50% heavier than their smaller counterparts.

You have to maintain your weed eater to keep it in good working condition, and this is regardless of the type you chose. Without maintenance, the tool will wear out faster than expected, and will also not trim well.

Hence, to ensure you have an easy time, you should choose one that is easier to maintain. When it comes to the ease of maintenance, the simpler design and fewer parts of the 2-cycle trimmers give them a clear advantage.

But, despite having more parts and significantly more complex design, the 4-cycle trimmers also have the advantage that they do not need an oil and gas mix. This minimizes wear for longer service life.

With 2-cycle trimmers, there will be dirtier combustion which adds more wear and tear, and the oil and gasoline measuring and mixing also means more work for you. Hence, when it comes to the maintenance, each trimmer will have its good and bad side, and so it is up to you to decide what you prefer.

Besides looking for weed trimmer that cuts fast and efficiently, you also need to go for something that is more budget-friendly. And so the price will also be a significant factor to consider when trying to choose between the 2 and 4-cycle trimmers.

Generally, the 4-cycle trimmer is the pricier of the two, and you can expect to pat between $50 and $200 more than what you would pay for a simple 2-cycle weed eater.

However, while still at the price, you will also need to consider the cost of using both when deciding on what to buy.

While the 2-stroke trimmers will be significantly more affordable to buy, they will have a higher cost per hour of operation due to the need to mix gas and oil, and their relatively lower fuel efficiency.

Worst yet, 2-cycle trimmers will not last as long as the heavy-duty 4-cycle trimmers. This means you have to replace them more often. In the end, you can spend almost as much money as you would spend to buy the 4-cycle trimmer.

Gas weed eaters will outperform the other types like the electric and battery-powered models in several aspects, but to get great service from one, you need to choose what works best for you between the 2 and 4-cycle trimmers.

The choice here will depend on how much cash you are willing to spend, and also what you are looking for in a gas trimmer. But, the good news is that both still trim well enough, and picking between them should not be hard if you know what each has to offer.

Anyone looking for a smaller and lightweight trimmer that is powerful enough, the 2-cyle trimmer should work well enough. For those that do not mind spending more cash to get something more heavy-duty and efficient that also cuts with less noise, a 4-cyle model is perfect. 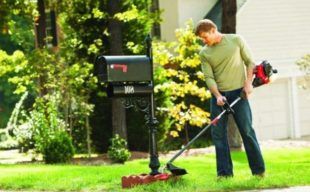 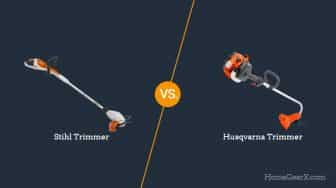 Stihl vs. Husqvarna Trimmer: Which Brand Should You Choose? 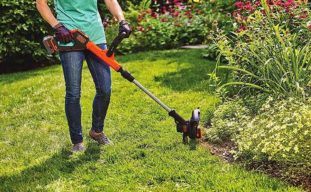 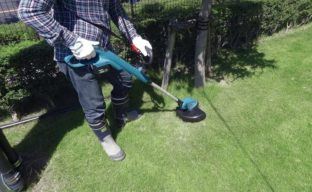 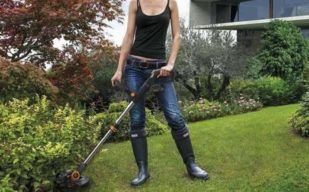 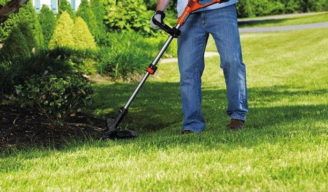 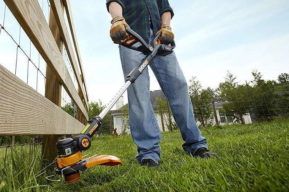 The 9 Best Lightweight Weed Eaters of 2021 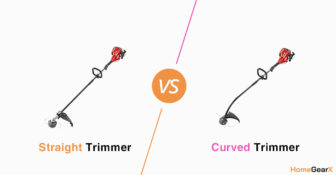 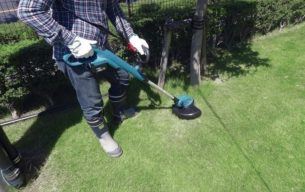