Last updated on Feb 22, 2021 by Editorial Staff
Affiliate Disclosure: When you buy through links on our site, we may earn an affiliate commission at no cost to you. 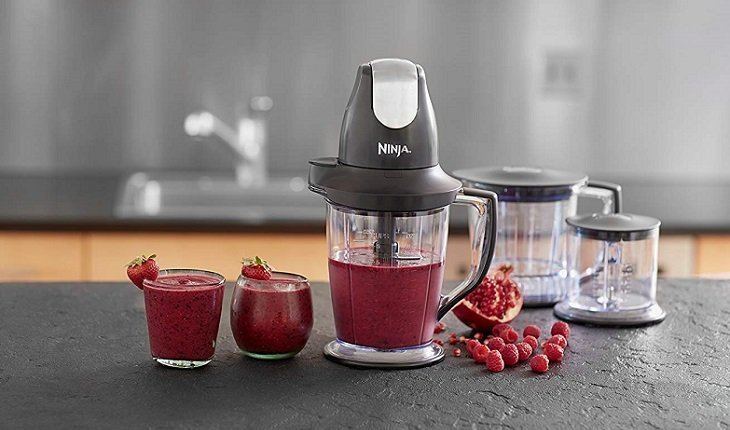 As much as specialized blenders and food processors work superbly as single-purpose appliances, there has been an increase in demand for blender and food processor combos, which customers prefer because of the all-in-one convenience package.

Such products are cheaper than compared to buying a blender and a food processor separately, and also occupy less kitchen countertop space.

However, even as they gain in popularity, some of them that stand out because of having certain superior features such as more power and high durability as compared to the rest.

For this reason, this article looks at the best blender and food processors to consider buying. 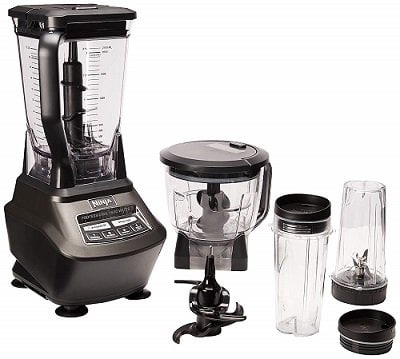 SharkNinja’s BL770 stands out as the best overall blender and food processor because it features a very powerful 1500-watt motor. This gives it total crushing power that pulverizes ice, whole frozen fruits, and vegetables in seconds.

Coupled with a generous 72-ounce pitcher, this unit is capable of handling quite a big batch of blended food at a time. This container can also be used to mix dough and the BL770 actually comes with dough blades that can help you mix 2 pounds of dough in 30 seconds.

You also get 3 speed/presets, with the first speed being ideal for mixing dough, the second for blending and the third for ice crushing.

Other features include a pulse speed for manual control and a single-serve function for blending foods in the to-go cups. However, there is no built-in timer.

2. SharkNinja QB1004 – Blender and Food Processor with a Power Pod 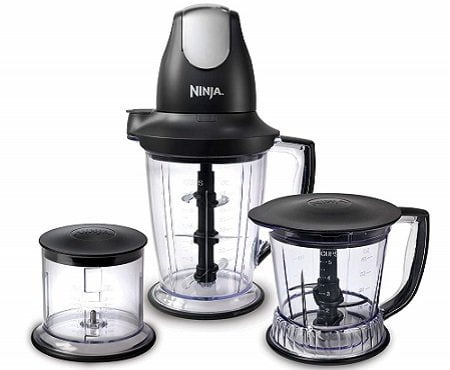 Instead of having a motor base, SharkNinja’s QB1004 features a 450-watt power pod, which is easily interchangeable between the three included containers.

That said, you get a 16-ounce chopper, a 40-ounce food processing bowl and a 48-ounce pitcher for blending purposes, and each container has its own convenient storage lid for covering up the prepared food.

Though the 450-watt motor is not powerful enough for crushing ice and hard, frozen fruits, it performs very well when blending smoothies, chopping veggies and processing food.

Other features include stacked blades (4 and 6 blade sets), BPA free and dishwasher-safe removable parts and a pulse function, which is activated by pressing on a large chrome button on the upper part of the power pod. 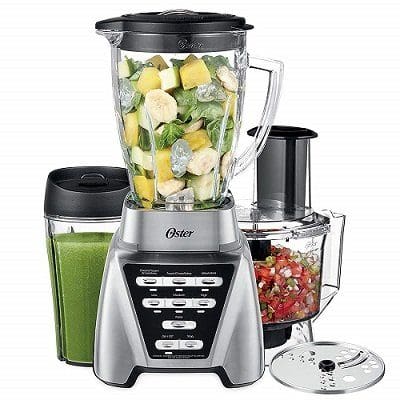 Oster’s Pro 1200 is equipped with dual direction blade technology, which rotates the blades in forward then reverse motion in any selected setting so as to optimize the blade’s power. This ensures all the ingredients flow down to the blades for an even food texture across the board.

That said, you get a number of control options, which include a low, medium and high-speed setting, green/ frozen smoothie, food chop/ salsa and milkshake presets, and a pulse function for manual control over the blender or food processor.

Power is provided by a 1200-watt motor, which is housed in a premium stainless-steel finished motor base. This gives it a very modern and classy look.

This motor transfers its torque to the blades using an all-metal drive system, which is very durable and ensures an efficient transfer of rotational energy for efficient blending and food processing.

You also get a 24-ounce to-go cup, a 40-ounce food processing bowl and a 48-ounce Boroclass glass pitcher for blending purposes. However, this glass pitcher requires careful handling because it is very delicate. 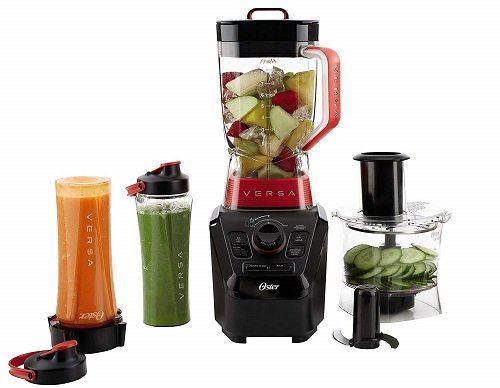 With Oster’s BLSTVB-103-000, you get 4 containers of different sizes, which include two 20-ounce blending cups, a 40-ounce food processor and a 64-ounce BPA-free Tritan jar, which is large enough to make a serving for a family of 3 to 5 people.

Though very costly, this product also features a relatively powerful 1100-watt motor, which is ideal for crushing ice and pulverizing fruits to create the perfect smoothies. It has a smoothie preset to help you achieve this.

Other than that, the unit also features a dip/ salsa preset, a reverse blend plus a pulse function and 3-speed settings, which include a low, medium and high, giving you complete control over the motor’s output to the container above.

To achieve an even texture across the board, an auto-reverse function is built-in and it basically runs the blades in the opposite direction on every restart, and this ensures that all the food is pulled into the blades to create the perfect mix. 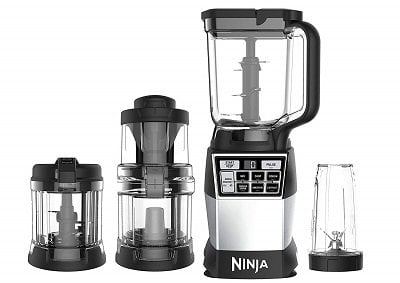 SharkNinja is a well-known brand in this segment and the company has gone a step further with the AMZ012BL to make it a 4-in-1 blender and food processor.

These 4 functions are accompanied by their respective containers, which include a large 72-ounce blending jar, a 32-ounce food processing bowl, a 24-ounce to go cup and an automatic spiralizer for turning fruits and veggies into noodles.

For controls, 6 presets are built into this unit, and they include mix, chop, dough, frozen drink, smoothie, and extract.

All of them are controlled using Auto-IQ technology, which combines specifically timed pulsing, blending and pausing sequences to optimize the food preparation process.

A pulse setting is featured for manual control while an in-built timer makes it possible to time the manual pulse control to reuse it in the same amount of time for consistent food texture results every time.

On the downside, this product is relatively expensive, and it lacks a dual direction or automatic reversal feature for alternating the blade rotation between the front and reverse directions. 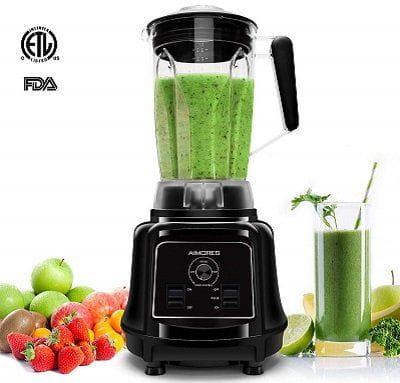 Aimores’ commercial blender and food processor is a very easy-to-use product, featuring just a few speed settings (low, middle and high), which are set using a variable speed control dial, allowing you to refine your purees, smoothie and soup textures.

A pulse toggle switch is also included among these settings and it is ideal for customizing the texture of these foods further to have something like a coarse layer of food chops over a smooth puree in the same blending cycle.

The unit comes with a large 72-ounce pitcher, which can make enough servings of the customized textured drink for a large family of 5 to 8 people.

Inside this pitcher, a set of 6 hardened stainless-steel blades are used to do the actual crushing, and are optimized for blending as well as for grinding coffee and spices, and processing meat and vegetables, giving this jar multipurpose use.

These blades are run using a powerful 1100-watt motor, which is very effective at pulverizing ice and frozen fruits, as well as for crushing and grinding the foods described above.

How to Buy the Best Blenders and Food Processors 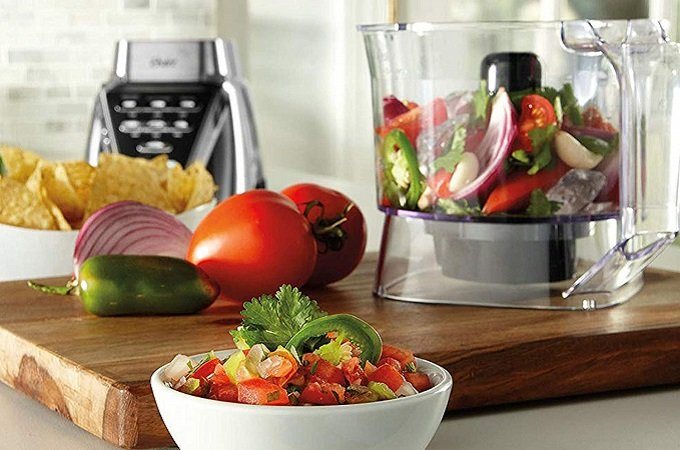 The capacity of a blender and food processor’s containers ultimately determines the number of servings that you can make at a time.

While large containers (usually above 60 ounces) are recommended because of their practicality, smaller cups can also work if the unit is meant for personal use.

Therefore, before buying such a product, ensure that you consider the number of people that it is meant to serve, then select the appropriately sized container.

More power is good for superior blending and food processing performance, but it isn’t necessarily the best. Usually measured in watts, a powerful motor in most cases makes the product more expensive and will result in high power bills due to the high energy consumption.

On the other hand, a less powerful motor (with a rating of fewer than 1000 watts) is not ideal for certain tasks such as crushing ice and hard fruits, but it is very energy efficient.

Read More: The Best Blenders for Ice and Frozen Foods

The best thing to do is to balance in between. A blender with an 1100 – 1400-watt motor such as Oster's Pro 1200 is powerful enough for the job and still relatively energy efficient.

However, if you don’t mind paying high energy bills, go for the most powerful blender and SharkNinja's BL770 is the best option.

For speed, the more the number, the better. Different speeds usually result in different textures of the processed food, with a faster speed resulting in a smoother texture while a slower speed creates a coarser look and feel from the ingredient.

Therefore, in order to give you a wide range of the possible foods that you can make, it is better to go for a blender and food processor with the highest number of speeds such as Oster's Pro 1200.

Another thing to consider is the pulse setting, which gives you more manual control over the blending process so that you can further customize the food’s texture.

As compared to the manual variable speed and pulse settings, presets are automatic one-touch options that are optimized to blend or process the food in the best way possible.

Since the most commonly made foods are smoothies, salsas and the like, it would be a good idea to have these common presets to get the convenience of making the foods to a consistent quality every time.

That said, SharkNinja's AMZ012BL stands out due to its 6 presets.

On material, blender and food processor pitchers are either made using plastic or glass. Although glass is very delicate, it does not fade or discolor over time, and this means that you get to see the colors of the food inside at their very best as the ingredients are being tossed and turned.

Plastic, on the other hand, might discolor especially after long exposure to hot foods such as soups. However, this material does not break easily, making it very durable.

Buying Guide: if you are a clumsy person, ensure you avoid glass pitchers at all costs. However, if you can handle glass jar, it is the best option to consider.

Blender and food processors are worthy investments to have in your home because they combine the functions of several appliances into one.

This ensures you get value for money, use less kitchen countertop space and enjoy the same benefits as having the specialized separate appliances.

That said, SharkNinja's BL770 stands out as the best blender and food processor due to its power and high performance. 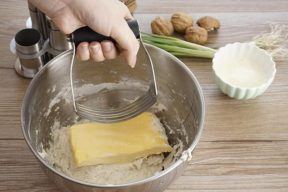 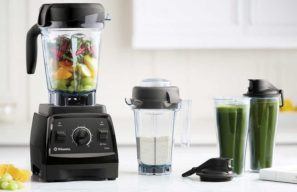 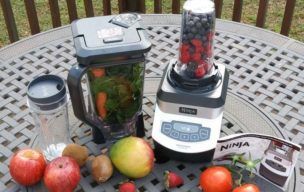 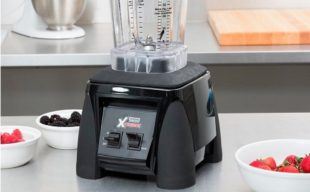 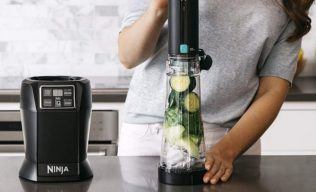 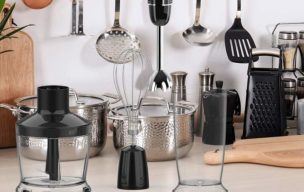 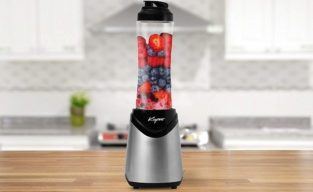 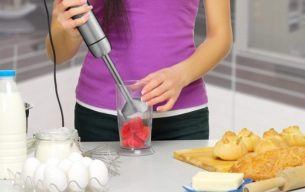 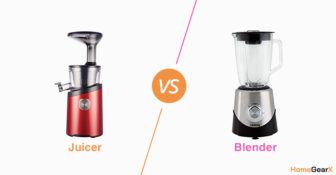 Juicer vs. Blender – What’s the Difference?