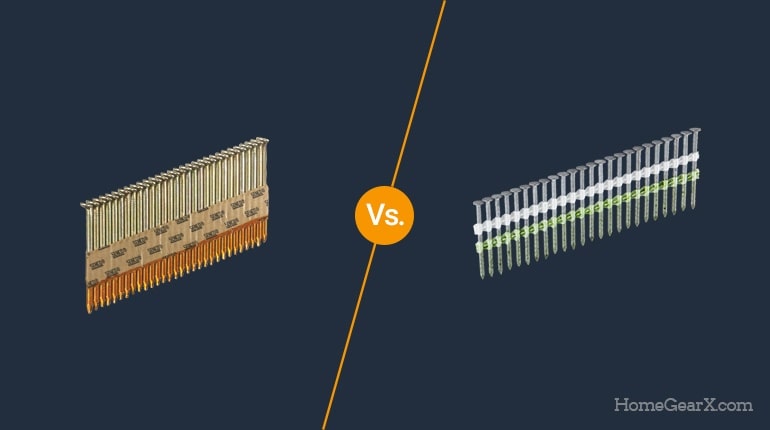 As a DIY or novice woodworker, nails might all look standard as their main purpose is to hold wooden boards or blocks together. However, if you take a closer look, nails have some slight differences that determine their application area.

Some of these differences lie in the nail head’s design and this can be clearly seen when comparing clipped and round head nails. These two have the following differences.

Round-head nails should be used to install roofing sheets or for constriction in areas that are regularly hit by earthquakes, tornadoes, hurricanes, etc. This is because they have high holding power.

As for clipped head nails, they are recommended for indoor use such as in building cabinets and other pieces of furniture.

The most notable difference between a clipped and a round head nail is, obviously, the shape of the head. Clipped nails have a D-shaped head that is basically round but clipped on one side, hence the name.

However, the round head nail has a full head with the nail pin dropping from the middle on the other side of this head.

With the D-shape design, clipped head nails can be packed in a smaller magazine as compared to the same number of round head nails. This is because they occupy a smaller space and can, therefore, be densely packed without jamming when using a nail gun.

This dense packing also means that you get more nails between reloads, which results in reduced reload times. The result is faster, uninterrupted nailing.

Other than that, smaller magazines are lighter and take up less space. This means that when using clipped head nails in a nail gun, it will be lighter and more compact, making it more comfortable to handle.

However, with round head nails, they require more spacing when being collated and therefore, require larger magazines that are bulkier and heavier. They take a shorter time between reloads, which can be inconveniencing if you are working on a large-scale project.

Round-head nails provide more holding power because the extra surface provides a bigger area to hold onto the block, sheet, or panel. This makes them ideal for installing roofing sheets as they prevent strong winds from ripping them off.

However, in some cases such as framing where lateral force is the main issue as opposed to vertical force, what matters is the diameter of the nail. This means clipped head nails can be used in such applications as the head only limits the penetration depth.

Overdriving is the situation in which a nail sinks into the wood, including the head. This might affect the quality of the joint because the nail might protrude on the other side or sink in too deep to provide enough support.

It can happen when using clipped head nails because they have a smaller surface area on the head. However, with round head nails, the wide surface sticks to the top to ensure you get a solid joint.

This is why round heads are ideal for building in hurricane, tornado, or earthquake-prone areas, especially for roofing purposes.

Since clipped head nails can be tightly packed in a steeper angle, they are usually collated using paper. Paper collation results in a cleaner working area because no residue is produced as you hammer in the nails; both the nail and paper are pushed into the wood.

However, with full round head nails, they are usually held by a plastic collation, which is basically a plastic frame for feeding the nails to the gun. This setup blasts out plastic pieces as you fire nails into the wood, which messes up your work area.

In some cases, wire weld collation is used and this poses a safety risk because the wire or plastic debris can fly into your eyes. Therefore, safety goggles should always be worn.

Other than that, these pieces can penetrate the workpiece together with the nail, which can cause flagging defects. These will ruin your work.

7. Extraction: Round Head Nails are Easier to Pull Out

This is an area where round head nails excel. The extra surface makes it easier to pull out the nail if it is not punched in properly into the wood. This will result in minimal damage during extraction.

However, with clipped head nails, the narrow head surface makes it very difficult to hold using a nail puller. This can cause a lot of damage to the wood if you attempt an extraction.

To avoid this, either use round head nails or be very careful when using D-shaped nails such that you punch them accurately every time.

Lastly, if you are on a tight budget, clipped head nails are the better option to buy because they are cheaper than their round head counterparts.

However, do not compromise by buying them for certain projects such as roofing. The recommended usage should be considered first before the cost.

In summary, clipped head and round head nails have a very minor difference between them. However, this brings about a huge difference in the application areas due to the advantages and disadvantages of each.

After reading through this comparison, you should have an easier time determining which one works better for your project.