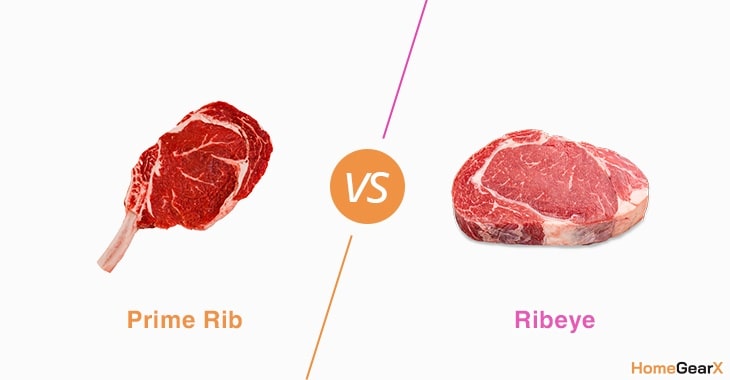 Things can sometimes get confusing when it comes to choosing meat cuts as there are plenty of options to pick from especially when buying from a highly skilled meat cutter or butcher.

The prime rib and ribeye are two of the most commonly confused beef cuts as many people can hardly tell the difference whether they are raw or cooked. But, to some extent, this is justifiable as they come from the same spot in the cow and also look quite similar.

But despite the similarities in appearance and taste, the two have some major differences which should explain the different methods of preparation and cooking.

If you are one of the many meat junkies out there that are unable to tell the prime rib and ribeye apart or just find it impossible to pick between them, this piece is for you. Here we provide an overview of each and also highlight the key differences between them in more detail.

Both prime rib and ribeye are beef cuts and are among the most prized steaks out there. Also, both come from the ribs of the cow which makes it even harder to tell them apart.

But, these are quite different steaks and will differ in everything from the size to flavor. Here is a brief overview of each of these amazing meat cuts. 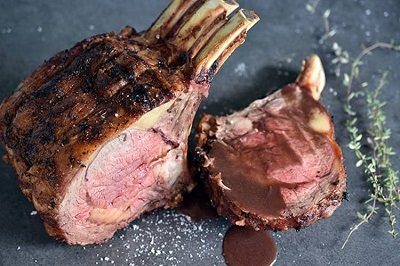 Prime rib or the standing rib roast as it is also referred to as is a popular holiday cut and one of the most sought after parts of a cow, and it comes from the same area as the ribeye.

This larger steak cut will include both ribeye and bone, and it will come from the prime area of the ribs which is the area with the 6 to 12 ribs. But, the word prime should not mislead you into thinking that this meat cut is always a prime cut because, in this context, it is more indicative of the part of the cow where the steak comes from and not the quality.

When cooked, the prime rib tends to have a softer texture and because it contains more fat than a ribeye, it will also be generally moister. Moreover, because it is cooked with the bone, it will have a richer flavor.

However, it is worth noting that because it is a thicker and larger meat cut, it will take relatively longer to cook than a ribeye, and this is because it is cooked at a lower temperature. Also, prime rib cuts tend to be more expensive. 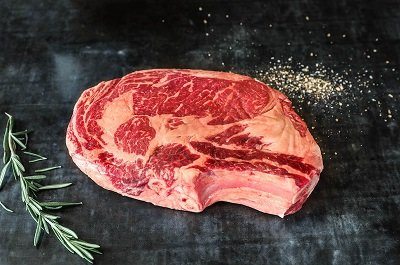 The ribeye is quite similar to the prime rib given that they come from the same part, but it is cut differently and unlike the latter, it is cut off the bone before roasting.

This meat cut is also often referred to as the rib steak, and it will have less fat than a prime rib which means that it can sometimes have a tougher texture.

Due to the way it is cut, the ribeye will have an oval shape in the meat thanks to the missing boat, and this explains where it gets the name. And like the prime rib, it can either be cut into smaller steaks or cooked as a roast.

Cooking it will also be at medium to high temperatures, and the absence of the bone and the relatively smaller size means it will cook much faster.

Prime rib and ribeye are two of the juiciest and most flavorful beef cuts, and so you can be sure that you will have a treat no matter which one you choose. But, it is always a great idea to know how they differ to make an informed decision, and here are their main points of departure.

The size if the cut is the most obvious difference between these two meat cuts when looking at them before you even get to cook and taste them.

Prime rib steaks tend to be much larger than a typical ribeye, and this is one of the reasons why it tends to be juicier and tenderer since the larger and thicker size allows it to be cooked for longer without overcooking.

Also, it is common to find the prime rib being sold as a roast with around 4 ribs and will be cooked whole before the meat is cut out when cooked. Ribeyes, on the other hand, are pre-cut from the bone before cooking and are clearly much smaller.

If the size of these two meat cuts does not make it easy for you to tell them apart, then the presence or absence of a bone should.

Prime rib steak will typically contain one large bone or a few ribs, and the rib eye while a ribeye steak will often be boneless which allows it to cook faster.

However, it is also worth noting that you can still get a bone-in ribeye steak which usually contains one small bone.

While the texture that you get with these meat cuts will mostly depend on the cooking method, there are some distinctive traits that each has when it comes to the texture.

For the prime rib, you get a thick chunk of meat with the bone and more surrounding fat and muscle. This fat gives the meat cut a very soft texture, and because it is a bone-in cut will also moister than a regular ribeye.

Since both the ribeye and prime rib are cut from the same area in a cow, they will typically have a similar beefy flavor and besides being quite fatty, they will be more delicate than most other beef cuts.

But while the ribeye still has a full flavor, it will not be as flavorful as a prime rib. Prime ribs are richer in flavor thanks to the fact that they will have more fat and also because the bone provides an extra kick of flavor.

When removed from the rib before cooking, a ribeye tends to be a little tougher and will have a milder taste. However, when you sear it lightly and season on a skillet with some olive oil, it can have a much richer flavor.

Another significant difference between the prime rib and ribeye is how they are cooked since they will take a different amount of time to cook and also require different temperatures.

When you buy a prime rib, you will in most instances get one that is cut into a roast and will require you to cook it at low temperatures and for longer than you would cook a ribeye.

And while there are different ways of cooking it, a slow bake in the oven is often the most preferred method.

Ribeyes, on the other hand, can come either as bone-in or boneless steaks and given that they tend to be smaller and thinner than prime ribs, they cook relatively faster.

These steak cuts will require medium to high temperatures and will be ready a few minutes earlier than the prime rib.

To get the best-tasting ribeyes, pan searing and grilling are the most ideal cooking methods.

Cost might not be as important as the meat quality and flavor for most steak lovers, but it is also worth knowing how these two differ when it comes to the price and what you should expect to pay for them.

Given the relatively larger size of the prime rib, its total cost is often much higher than the smaller ribeye when buying a single steak. Also, the price per pound is higher for the prime rib, and this is often because it is generally a more flavorful meat cut.

While the prices will vary greatly depending on where you are buying your meats from, you can expect to spend between $8 and $12 to get a pound of ribeye. And for prime rib, the prices will typically range between $12 and $14 per pound.

But, in some places both these meat cuts can still be cheaper or more expensive than these price ranges, and so these are just indication of what you ar4e likely to spend.

Besides being more expensive, the prime rib is also harder to get if you are planning to cook it at home as most retail stores find it more profitable to stock the smaller and more affordable ribeye steaks than the larger prime ribs. However, a trip to your local butchery should help you land a nice prime rib cut.

While different beef steaks will have their good and bad traits, the prime rib and ribeye are two of the most flavorful and juiciest that you can get and will hence be a perfect pick for the steak lovers.

They both come from the ribs but are quite different in flavor, texture and even the price. The prime rib comes as a roast which means it will have a bone and will also contain more fat and muscle than the typically boneless ribeye. 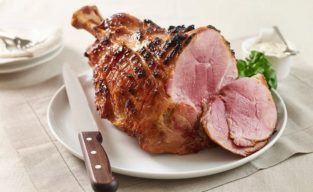 How to Smoke a Ham (The Complete Guide) 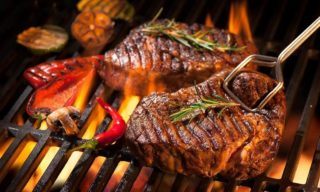 How to Grill Steak on Charcoal Grill (Step by Step Guide) 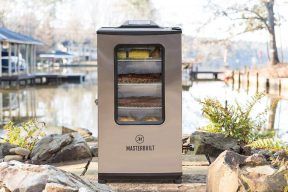 9 Electric Smoker Tips and Tricks that You Need to Know 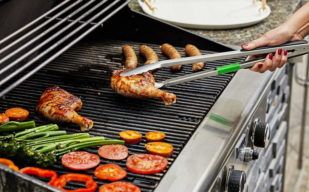 Grilling vs. BBQ: Which is Suitable for You? 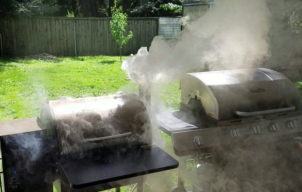 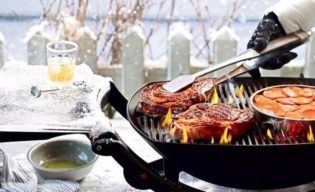 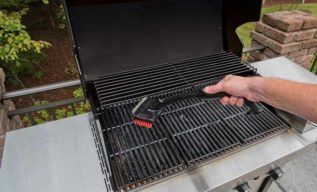 How to Care and Maintain Cast Iron Grill Grate 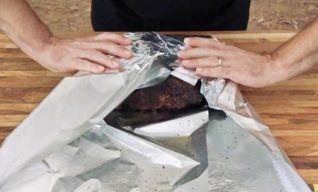 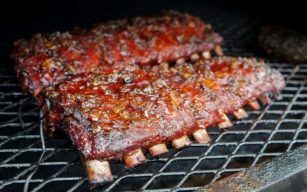 5 Different Types of Pork Ribs and How to Prepare