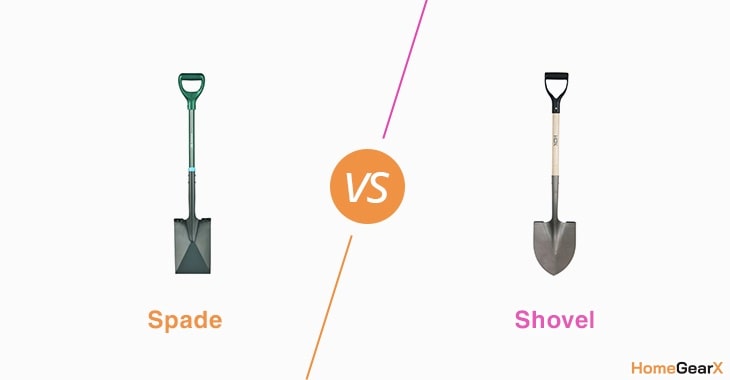 There are certain commonly used tools that many of us will not give much thought to despite being very handy around the home and using them often. Spades and shovels are a perfect example of this.

Most people tend to use the two terms interchangeably to refer to the same tool which is highly inaccurate given that they are two distinct tools designed for different uses.

While it is true they have more similarities than differences and they are used for closely related tasks, it is important to know what sets them apart. Knowing what each tool is for also helps to ensure you get the best service from it.

Here we highlight some key advantages of the spade and shovel, their shortcomings and also explain their differences to help you know what you need to pick the next time you are gardening or digging something. 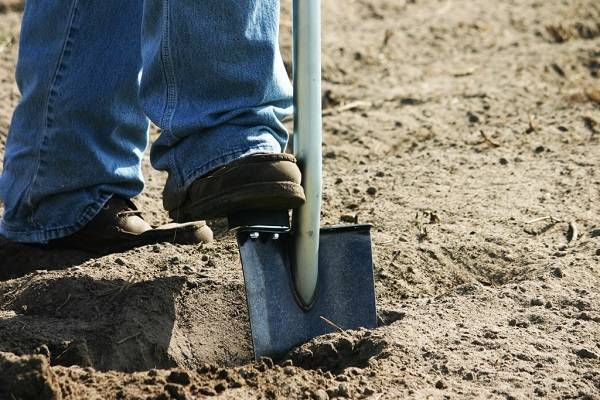 Spades are quite similar in appearance to the shovel but unlike the latter, they are specifically designed for moving loose material or soil and not for digging.

A spade will feature a nearly flat blade with a relatively deeper scoop and a straight edge that will not easily go into the ground when trying to use it for digging.

The primary uses of a spade are to scoop and move material, and so they will typically come with a longer blade to allow the user to carry more material at a go and hence speed up the job.

Besides scooping soil, the flat design of the spade will also come in handy for other tasks in the garden such as edging and when leveling soil or a new nursery bed.

Because their primary role is not to dig into the soil, spades will also sometimes be made from softer materials like plastic, unlike shovels which are almost always made from a hard metal material like steel.

The most notable shortcoming with spades is that most will typically not be very good for digging. In case you do not have a shovel around, it will be tough to get the straight edge on a spade to penetrate the ground.

The term shovel is often used to refer to a wide variety of tools that are used for shoveling soil and digging. However, its origin meaning describes a spade-like tool.

Although you can get shovels in a wide variety of shapes, sizes, and styles, a typical shovel will generally have a bowl-shaped blade that is built with a sharp tip to make it ideal for digging.

Shovels are perfect for both digging and moving dirt as they also have a deep scoop which means when using one, you will not need any other tool to move the soil after digging. The sharp edge allows them to dig deep enough with little effort.

But, it is worth noting that some will also come with a rectangular blade which can make them pass for a regular spade, but you can still tell them apart as the blade is significantly narrower.

To make digging easier and faster, a typical shovel will include footrests at the top section of the blade on both sides of the handle. When digging, the user only needs to put one foot there and use it to force the blade into the ground.

The only thing that some users might not like about the shovel is that it takes quite some effort to use. And this will be more so when trying to dig into hard ground with a shovel that does not come with those handy footrests on the blade.

Spades and shovels are common tools which most peoples assume they know well given that they look obvious. But, a huge percentage of these individuals will often confuse the two or worst yet assume they are the same tool. Keeping the few differences below in mind will ensure you can tell them apart and know what to use in different situations.

The best and perhaps the easiest ways to tell a spade apart from the shovel is by using the blade shape. Everything else from then length of the handle to its design might look the same, but the blade shape will always be different.

Starting with the spade, you can expect a typical one to have a flat blade that will be squared-off at the tip which makes it perfect for lifting loose material and for edging. Also, the blade will be flat at the back, a design that comes in handy when leveling soil.

With the shovel, on the other hand, you get a sharply pointed blade that will be designed to cut through different layers of hard soil with ease. The blade is often sharp enough that it can cut through tough roots. When looking at it from the side, it appears to curve inwards.

The blade on a shovel will come in different lengths depending on what it has been designed for. And it is important to know that both spades and shovels will have varying blade designs since they are available in different types for different applications.

While both spade and shovel have that one original tool that comes to mind when you think of either, it is important to know that both come in several types.

These different types will differ in everything from the size and design of the blade to the handle length and their uses.

There will be a huge variety of spades to pick from and more types are always popping up now and then as users and their manufacturers discover new ways to alter the design to make it more ideal for a particular purpose.

However, the most common spade types out there are the garden spade, drain spade, edger spade, and the root spade and each has been built for a different purpose.

The garden spade is the more multipurpose option of the four types and will be very handy for different applications in the garden. Drain spade, on the other hand, is for transplanting thanks to the narrow and slightly concave blade. The edger spade is ideal for edging and the root spade is perfect for whacking weeds.

Shovels will also give you as many options to choose from as the spades if not more, and so you can be certain that there will be something for almost any task that might need a shovel.

While this list is not conclusive, the most common shovel types are the multipurpose shovel, digging shovel, trenching shovel, scooping shovel and trowel shovel.

As its name suggests, the multipurpose shovel is built for digging and moving almost any kind of soil, and it can cut through tough roots with ease.

Digging shovel is the most common, and it is quite multipurpose while scooping shovels are for moving loose material just like spades. Trenching shovels are great for clearing long trenches and the trowel is a small shovel for weeding and planting.

With the different shovel and spade types described above, it should now be clear what each tool is meant for.

However, it is good to know the general or the best uses for each as this can give you an idea of what to buy even when you are not sure of the specific type of either that you need.

The spade will be a great tool to have when you want to move any loose material in the garden such as soil or compost. However, when edging or want to finish up a bed by leveling it, this is one of the best tools to have around.

For the shovel, you will hardly get any other home tool that will do a better job when it comes to digging as it excels at this, but with the deeper scoop design, it can also lift huge volumes of dirt.

Both the shovel and spade will be available in different lengths depending on the type and even the brand you are buying from. Also, you can even change the handle to alter the length after buying one, and so neither of the two will restrict you to a particular length.

However, spades will often come with shorter handles than shovels. And this is meant to give users better control when doing typical spade jobs like edging and leveling soil. A longer handle on a spade would give you a hard time when working.

Shovels will come with a relatively longer handle than spades as this will give you better leverage when lifting out soil after digging and hence make the job easier.

Because shovels are built for digging, they will almost always include footrest on the top part of the blade and both sides of the handle.

These footrests are designed to make digging easier as they will allow you to drive in the shovel easily by applying extra force on the footrests with the feet. Using a shovel without footrests when digging hard soils can make the job more tedious.

Since the spades are hardly ever used to dig, most will not include these footrests, and so this is also a reliable way to tell the two tools apart if you are still confused.

With most tools, it is hard to come up with a specific price that you would expect to pay for them as the prices differ greatly given the differences in the brand and the materials used to make them.

Also, with both spades and shovels, the types and models that are built for a specific task and using special materials will cost much more than the regular ones.

But overall, shovels tend to be the cheaper of the two as you can even get a basic one for as little as under $10. Spades are also often inexpensive, but they will typically cost more than shovels with the top quality models made with stainless steel blades retailing for over $50.

Shovels and spades are some of those tools that you can expect to find in many homes. And while in most instances they will be used for pretty much the same jobs, these are still different tools.

These tools differ not only in the overall design and appearance but also in what each is built to do. From our comparison above, it should now be clear how you should use each.

All in all, the spade is the tool to go for when you want something to help move loose materials or to level soil while a shovel will be your best choice when digging.